Some time ago I met a beekeeper who had ten beehives from which he extracted a wonderful honey. Or were they eleven? Well, he had a few hives, with a lot of bees, countless of them, many being a very large number.

That beekeeper loved his work. For that reason calling it work would not be the most appropriate. Let’s better say that he did this task with such love that he did not need to be looking at the clock to finish it and be able to go to rest. He felt like one more bee among all the others. They never attacked him and he was able to take care of collecting the honey they produced with total trust.

Everything seemed to go normally, until one day, without warning, something unusual happened. As usual, the unusual is never announced before. On that particular day, different from the others, the beekeeper had a thought that had never before crossed his mind. The beekeeper whose name I can not remember but buzzes in my ears, realized that maybe if he did not take the honey, they would not work so much because they would produce only what was necessary only for them and not so that the beekeeper could make money.

When that thought appeared to him inside his head, and also outside of it, because he saw it everywhere he looked, he saw it furrowing the sky, in the clouds, he saw it in the air he breathed, in all the dimension in which he lived, that thought changed his life forever.

The beekeeper felt guilty for choosing that task to earn money. He felt really bad about himself. He did not understand how it took him so long to realize reality. He was responsible for them to work more than they needed, much more.

Studies say that a small teaspoon, those for coffee or tea, full of honey is the result of the life work of about ten bees. In order to collect a kilo of honey you need the work of 2,500 bees that will travel between 40 and 100 km each day. About 8 thousand kilometers of flights and an average of one and a half million flowers (depending on the variety, of course) are necessary to harvest the nectar that will give us only one kilo of honey.

Suddenly all the necessary data to understand how we obtain the honey became visible for the beekeeper. Not that he did not know about it, but he had never stopped to see it from a bee’s perspective. And that is what happened to him. He suddenly felt a worker bee living for 5 to 6 weeks and producing less than a tenth of a teaspoon of honey.

He became so depressed that he took off his gloves, his hat with a net and all his special clothes for beekeepers, and he lay down on the grass to mourn and cry. He cried all afternoon, all night, the next morning. He cried days and nights, whole weeks that nobody counted but there were many. No one knew why the poor man cried so much because he could not even say a word. His neighbors tried to comfort him. His wife, his children, his dogs, his cats, his ducks, all tried to comfort him. But the poor beekeeper was still crying. His crying was like rain falling intensely, wetting everything. Where the rivers of tears fell, everything became more humid and you could see the plants grow at a great speed. The flowers opened and perfumed the air, offering the fragrance that invited butterflies, insects of all kinds and birds to enjoy their nectar. The bees were amazed with so many flowers emerging almost from nothing, thanks to the cry of the sad beekeeper.

Ususally, bees dance at the entrance of the hive and according to the type of dance the others know how far the flowers are and in which direction. But these bees, seeing and smelling so many flowers opening up just a few flutters away, were partying. Not so the sad beekeeper who did not stop crying, despite everyone’s attempts to not feel bad.

But, as everything stops happening, something happened. A queen bee perched on his big nose and hundreds of little bees came to buzz near his ears. None came to sting him. He did not need his suit to protect himself. He had used it for years, thinking they might do it, and now he could be with them without that “defense”. The energy of the swarm produced such electricity throughout his body that in a few seconds the man was standing up with a vitality he had never felt before. Suddenly his face turned into that of an innocent child full of life.

The bees seemed to push him from behind in the direction of a shed a few meters from the house. There came the surprised beekeeper who could not believe what he saw. When he put his eyes on a shelf he was paralyzed and his mouth was so open that some bees entered and left it without him even noticing.

Dozens of jars that were once empty, were now full of honey. And he had not done anything, he had not collected the honey, he had no way to do it in the conditions he was in. And I think that when feeling so bad about the revelation of that thought that invaded him, his decision would have been to never again engage in such a task. As I was saying, dozens of jars filled with rich honey were in front of his eyes, and he was surrounded by buzzing and fluttering that created this unusual electricity. He smiled, wiped his eyes, but tears continued to flow from them, only this time they were tears of joy.

From then on, the bees made honey when and how much they wanted. And if they did not want to do it, it was also perfect, of course. The work of the beekeeper was to devote himself completely to embellishing the surroundings with flowers of varied species and colors, with aromas that flooded the air and attracted the family of bees to enjoy the wonderful nectar.

I don’t know the name of some of the authors of the amazing images that beautify this story , but I’d like to. 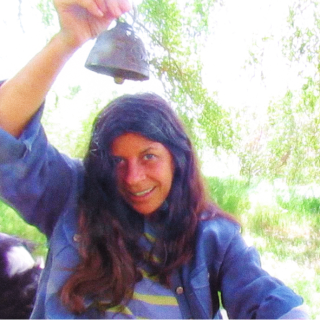